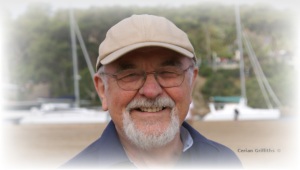 Bryn Griffiths is an award winning Welsh poet and writer. He was born in Swansea, South Wales, but lived much of his early life in the coastal countryside of West Wales before returning to St Thomas, near the Swansea waterfront.

Bryn received the Community Cultural Development Board’s 2004 Ros Bower Memorial Award for his commitment to the principle of giving all Australians the right to access the arts.

His poems are often thematically concerned with the ocean and the history and landscapes of Wales, particularly the lower Swansea Valley, devastated by the Industrial Revolution, as exemplified in his first collection of verse, The Mask of Pity.

Bryn Griffiths went to sea at 17, “shipping out” as a merchant seaman for ten years from the Port of Swansea, before study at Coleg Harlech in North wales and a subsequent career in London as journalist, broadcaster and television scriptwriter. During his years in London during the 1960s he founded the Welsh Writers’ Guild’, with Dedwydd Jones, John Tripp, Robert Morgan, Sally Roberts and many other Welsh poets and writers. The Guild was a cornerstone of the Anglo-Welsh literary renaissance which led to the foundation of the re-created Welsh academi.

Throughout the 1970s Bryn gave poetry readings and lectures in Britain, North America and Australia before founding the first Arts and Working Life project for workers in Western Australia. In 1985 he was appointed writer-in-residence to the Australian Merchant Navy and later went back to sea and served for many years as a working mariner before returning to Wales. He remains today a life member of the Maritime Union of Australia and writes poetry, memoirs and maritime history